On the 18th of May, 1982, in Amed Prison, Ferhat Kurtay and his friends Mahmud Zengin, Eshref Aynik and Nejmi Oner organized a self-sacrificing action to protest the politics and actions of denial and surrender which were implemented on the prisoners' personal freedom. Ferhat Kurtay was known as a leading cadre who knew Kurdish well. He was known as someone who was an expert in reading and writing Kurdish, loved to speak in Kurdish, and make his important demands clear in Kurdish conversations. We also see from his book titled Golden Hair of the Sun that he loved children a lot. Ferhat, who lived without doubts, always carried out his patiriotic and revolutionary responsibilities. Ferhat was a revolutionary leader and a radical patriot who was in touch with his soul and his roots. Ferhat was a spouse, a philosopher, a teacher, and a writer. Ferhat was an understanding person who possessed every skill.

Ferhat Kurtay was born in 1949 in a village in the Qoser region of Merdin. Ferhat Kurtay, who was born into a religious family very in touch with its roots, completed his primary school studies in Qoser and Merdin before studying at the Karadeniz Technical University's Electrical Engineering school. During his time in prison, he took his place among many different literary and intellectual efforts. In prison number 5, he published a biweekly newspaper called Hawar. Before he was subjected to intense pressure and torture, Ferhat Kurtay carried out extensive work creating a Kurdish dictionary and brought this work with him from place to place. After the torture and violence began in prison, his work with the Kurdish dictionary and Hawar newspaper ended. But Ferhat became a source of resistance for his friends in his cell block. He explained to his friends that the primary road to survival was resistance. The first person to truly understand and implement the Modern Day Kawa[1] Mazlum Dogan's slogan "Resistance is Life" was Ferhat Kurtay himself. He had a knack for seeing what was happening and implementing things in response to this.

With revolutionary thoughts and actions, people and society could march on the road to freedom and democracy. Of course, the cost was heavy, but the rewards were plentiful.

Thirty-seven years ago, on the 18th of May, 1982, Ferhat, Nejmi, Eshref and Mahmud carried out a revolutionary action in the Amed Prison, setting their bodies on fire.

The fascist junta wished to destroy the mindset of freedom and the struggle for democracy among the PKK prisoners in Amed Prison, which had developed under the leadership of PKK. This policy was called "political death". The fascist junta utilized every type of mental and physical torture in order to achieve this. PKK prisoners resisted against this political death for months with their rebellious deeds. They entered into a resistance in the form of hunger strikes and death fasts in order to keep the hope for democracy and freedom for the people of Kurdistan alive. However, the policies of the fascist Turkish state, who built their existence on the denial and refusal of the existence of the Kurds, desired to uncompromisingly eliminate the PKK prisoners politically and ideology and hide them in the walls of the prisons. The self-sacrificing action which the Modern Day Kawa Mazlum Dogan carried out on 21 March 1982 opened a crack in these fascist policies. Ferhat Kurtay's reaction to this action was as such:

"Mazlum Dogan was my commander. We must honor the memory of our commander."

Ferhat's friends in his cell block understood that he had one hundred percent made his decision. He was someone whose words were always true. He had earned the trust, love and respect of his friends. Under conditions of limitless torture, which was like passing through a ring of fire dozens of times a day, Ferhat Kurtay took it as his duty to support his friends in every way. With this revolutionary and Apoist stance, he became a symbol of resistance in his cell block. However, this alone was not enough or him. Mazlum Dogan sacrificed himself, striking a blow to the political extermination of the enemy; to his friends, this truth was obvious. Ferhat understood that if this was not continued, and there were no more self-sacrificing actions, the enemy would continue their policies.

Those who decided to carry out this action came together in a short time. Ferhat Kurtay, Nejmi Oner, Mehmud Zengin and Eshref Aynik made the decision to follow the path of the Modern Day Kawa Mazlum Dogan.

With the day of the action growing closer and closer, all four of them were at peace.

Ferhat discovered the Apoist movement in Ankara. After his studies at the Karadeniz Technical University finished, he went to Merdin and the surrounding areas, simultaneously working as an electrical engineer and laboring hard to introduce the ideas of the Apoist movement with the people of Merdin. His Kurdish was fluent and well-developed. As a people's leader, because he spoke and taught the Apoist ideology in Kurdish, he had a huge effect on the strongly patriotic people of Merdin. In a short time, with his organized efforts, he became a leading cadre of the Apoist movement. In December 1979, when he was arrested in Qoser with M. Xeyri Durmush, he carried out work among the administration of the Merdin region.

As a youth leader, Nejmi Omer played an important role in the development of the Apoist movement in the Chermug district of Amed. He was principled in his life and his cause. He had an unwavering stance against injustice.

When the armed resistance began in Jurne Resh, Mehmud Zengin took his place among the resistance as an Apoist cadre. He joined as a youth cadre and after a short time took on military duties.

After all four comrades clarified the day of their action, they awated the 18th of May.

As the night of the 17th of May turned into the 18th, all four bodies became a ball of fire. From out of this ball of fire they raised this slogan:

All four of their bodies, all four of these brave Apoists became flames of resistance among the darkness of Amed Prison.

The struggle for freedom and democracy that the fascist military junta wanted to destroy was reinvigorated among the flames and light of these brave men.

With their self-sacrificing action, comrades Ferhat, Nejmi, Mehmud and Eshref were pioneers of the struggle for freedom and democracy for the people of Kurdistan. ... They showed that even among the most difficult and harsh conditions, revolutionary thoughts and actions complement each other and can open the path to victory.

Though thirty-seven years have passed since the "Action of the Four", it still guides every field of our struggle for freedom and democracy. The spirit and willpower of the struggle of the Four will be our indespensible values which we will use for all of the problems of our current reality... 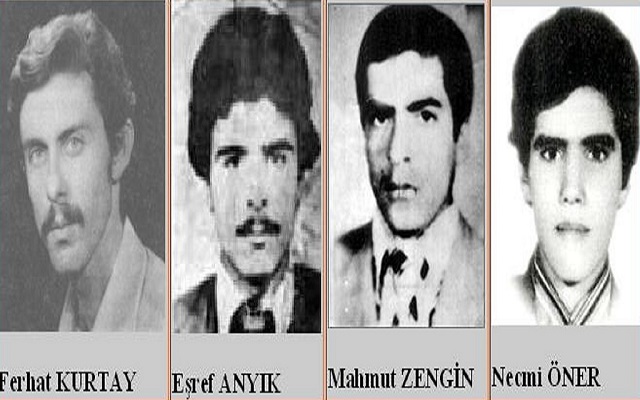